The continued growth at Contegra has landed the company at the 89th spot of the Top 150 Privately Help Companies in St. Louis. The article in the St. Louis Business Journal can be seen below. You can also see the article on their website here.

Contegra Construction was able to grow its revenue from $135 million in 2015 to $223.1 million in 2016 due to the expansion of its industrial sector and by focusing its efforts on a growing need for manufacturing and industrial distribution warehouses in the region, according to Eric Gowin, a primary owner of the company.

“We targeted large projects with national developers,” Gowin said. “We also completed large multi-family projects both locally and on a national level, which significantly increased our revenue.”

In 2017, the company will work on an expansion for Kuna Food Service in Dupo, Illinois; a new Bob’s Discount Furniture store in St. Ann, Missouri; and a redevelopment of the old Northwest Plaza property.

The company has four primary owners, Eric Gowin, Brad Barnard, Russ Henke and Dennis Araujo, but hopes to extend some ownership opportunities to the next generation of leaders at Contegra in the near future.

Add any jobs in 2016? Added one project executive, one project manager, three project engineers, two in administration and one superintendent.

Adding any jobs in 2017? One project engineer and one superintendent.

Located just south of New Poag Road in Edwardsville, the Gateway East 717 Distribution Center is the first speculative warehouse structure built on the east side of Illinois 255. Construction began back in June 2015 and was substantially complete in January 2016.

Contegra Construction Co. of Edwardsville has served as the development’s general contractor.
The property’s developer, TriStar Properties, selected Gray Design Group Inc. of St. Louis as the architect for the project. Propper Construction Services, another partner in the development,
has provided construction management. Other partners included leasing agent Cushman & Wakefield and the private equity firm of Pacific Coast Capital Partners.

Bobby Klucker, Contegra’s project manager, pointed out that the unique elements to this speculative warehouse, compared to others, that was used on the Gateway East 717 building was all concrete pavement on its exterior and a 36’ clear height. He also pointed out the biggest challenges were that of amenities, access and the weather.

There were no existing utilities or infrastructure to build upon at this site. Added to that was the heavy rain received back in June which only allowed for three days of work on the project, with 20 days lost. Yet the six-month schedule still prevailed.

The 717,060-square-foot facility is on a 76-acre site with 36-foot-height clearance capabilities. A concrete tilt-up distribution facility with 80 truck docks, it features a heat reflective and energy efficient thermoplastic polyolefin roof and design/build mechanical, electrical, plumbing and fire protection systems.

Gateway East 717 is expandable to more than 1.2 million square feet. Its construction has opened up an additional 700 acres of the 2,300-acre warehouse and distribution park for development.

Contegra Construction Company, LLC has announced eight recent additions to their staff. Steve Shawke and Chris Wernle have joined the project management team adding a combined 32 years of construction experience. Paul Hayhurst, who has four years experience, has been hired as a project engineer.

In addition, the fast-growing Edwardsville company has added Megan Turner in the accounting department and has also hired four field engineers. Dylan Bentley and Tyler Goodman are recent SIUE graduates in construction management. Scott Mayes is a SIUE civil engineering student scheduled to graduate in 2016. Pete Hackett, who joined the company from the U.S. Naval Construction Forces (Seabees), is studying construction management at SWIC.

“We are thrilled to be able to add such a well-qualified group to our team,” said Eric Gowin, Managing Member at Contegra. “We continue to believe outworking the competition is the best formula for success and these new hires have all demonstrated they can go the extra mile to deliver for our clients.”

Revenue at Contegra is expected to reach $110 million, up nearly 36 percent from 2014, according to Gowin. To make room for the new employees and the increased business activity, the company has added 7,500 square feet of office space and a CrossFit gym to their building in the Gateway Commerce Center.

The new executive office area, developed by Formation Architects and Louer Facility Planning, Inc., features project management and engineering offices as well as an open office work area with 10-12 foot ceilings. Hoteling workstations for field superintendents and engineers, a break room and a training room with state of the art sound and video systems have also been added.

EDWARDSVILLE – Rain was pouring outside the tent, but the mood under it was sunny as a host of dignitaries on Wednesday saluted the latest expansion planned at Gateway Commerce Center.

TriStar Properties has begun construction of a $30 million, 717,060-square-foot speculative distribution center, the first facility to be built on the eastern side of Illinois 255.

It brings a new angle of visibility to that portion of Gateway, which in the last 18 years has grown into a premier warehousing and distribution hub that now employs nearly 5,000 people.

The newest project, called Gateway East 717, will include development of the 53-plus-acre site and construction of a tilt-up distribution facility with 80 truck docks, a heat-reflective and energy efficient thermoplastic polyolefin roof and design/build mechanical, electrical, plumbing and fire protection systems. The Class A modern bulk building will have expansion capacities to more than 1,200,000 square feet.

“Last summer we built a 673,137-square-foot speculative building and it was fully leased before completion,” said Mike Towerman, president of TriStar Properties, referring to what’s known as Gateway West. “This new building will allow us to quickly meet a company’s facility requirements and provides a strategic logistical advantage for large distribution operations.”

The project is scheduled for completion in December 2015. Contegra Construction Co. is providing general contracting services for the project. Propper Construction Service is a partner in the project and is serving as construction manager, Towerman said. Also partnering is PCCP, a private equity firm. Both Propper and PCCP worked with TriStar on the Gateway West project, he said.

Gray Design is the latest project’s architect, and DTZ will provide leasing services.

The construction of the new distribution center opens an additional 700 acres of the 2,300-acre Gateway Commerce Center for development, officials said.

Towerman said if this project goes as planned more buildings are likely to be constructed on that side of the highway.

With more than 10 million square feet of leased space, the master planned Gateway Commerce Center is considered one of the top business distribution parks in the Midwest. Located at the intersection of Interstate 270 and Interstate 255, it is home to corporate tenants including Unilever, Proctor & Gamble, Dial Corp., Ozburn-Hessey Logistics and Hershey. Dial was the first venture, opening in 1998.

So wet were conditions Wednesday morning that the mandatory groundbreaking photo had to be shot on a concrete pad, under the dry tent.

The background of the main players

TriStar Properties was founded by Rodney Thomas and Michael Towerman in 1996 to develop industrial real estate. Since its inception in 1996, Tristar and its principals, operating through affiliated partnerships, have developed several large business parks with total acreage of more than 30,000 acres, as well as purchased and resold more than 3,000 acres of residential land. During this time, TriStar has purchased or developed more than 1,500,000 square feet of office space, developed or sold land for the construction of more than 10 million square feet of warehouses and distribution centers. TriStar’s current projects include virtually all real asset classes.

Propper Construction Services provide a full range of construction management services for projects on a national basis. Founded in 2014, Propper Construction Services is an affiliate of St. Louis-based Propper International. Propper International is one of the largest official suppliers of apparel to the United States armed forces, and also manufactures high-quality apparel for the commercial military, tactical, law enforcement and public safety markets.

Contegra Construction Co. is a general contracting and construction management firm serving the education, industrial, healthcare, municipal and office markets throughout the Midwest. Contegra Construction Company, LLC. was founded by Eric Gowin in 2003. Each member of our management team has more than two decades of experience in the construction industry. We have completed some of the largest projects in the region and our clients trust us to successfully manage their most complicated projects from start to finish.

SAUGET — Construction is finished on a $23.5 million FedEx distribution center in the Sauget Business Park.

St. Louis- and Edwardsville-based Contegra Construction has completed the 181,000-square-foot development for FedEx Ground, located on 32 acres along Interstate 255 within the 700-acre business park. The site employs 175 full- and part-time workers, who can process 10,000 packages an hour.

“It has generated an economic burst with welcomed construction jobs, as well as the long-term benefit that its 175 full- and part-time employees will bring to metro-east,” Gowin said.

Sauget Business Park Economic Development Director Jay Dinkelmann said the new distribution center is a good addition and is the second for the 20-year-old business park, joining R&L Carriers, which established there about 15 years ago and also delivers throughout the country.

“FedEx is a great addition to the park,” Dinkelmann said. “It helps us solidify as a major distribution, transportation and warehouse business park in the St. Louis area. We have probably 400 to 500 more acreage that is suitable for those types of businesses. We look forward to getting more of those as the economy improves.”

FedEx Ground, a subsidiary of FedEx Corp., was established in 1985. The Pittsburgh-based operation employs 65,000 people working at 33 hubs across the United States and Canada. The company delivers more than 4.5 million packages a day and has recorded $11.6 billion in annual revenue. 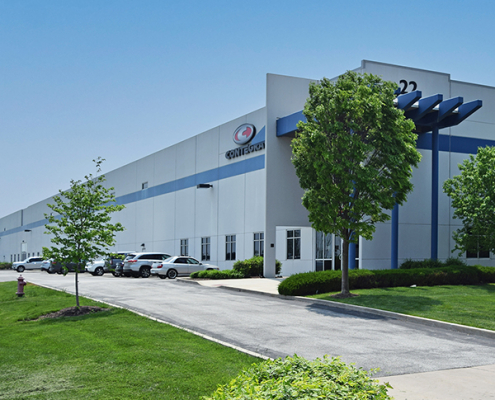